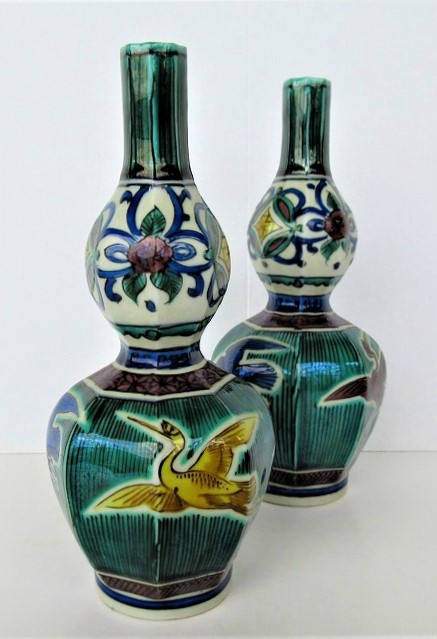 In the Meiji kutani, “aka-e” was a unique, more delicate and dignified works, so it was widely liked both domestic and abroad. It is said that more than 200 ceramic painters engaged in the painting of aka-e, and the master craftsmen also left behind many masterpieces of “aka-e”.

However, around 1887, while the production of “aka-e” reached the highest level, crude products became more and more widespread, and “aka-e” itself became tired from domestic and abroad. Around 1893, Matsumoto Sahei (松本佐平) who saw this situation, created a “Shoun-do style” that fused both “aka-e” and “ao kutani” (kutani that used a lot of green in the front) . This style of painting was the traditional ao-kutani since ko-kutani and Yoshida-ya kilns was reviewed again.

The feature of Matsumoto’s “Matsuundo style” is that the design is drawn on the entire surface of the body, which is a more pictorial style. He was able to have enough space to draw the design and painted the design on the white surface. Most of the designs are flowers and birds drawn with unique color paintings, and not only traditional Japanese paints but also both Japanese and Western paints were used at that time. Therefore, compared to the previous “Aokutani”, the glaze is thinner overall, but it is richer in color.

Gradually, among the pottery painters of that time, painters who longed for ko-kutani and Yoshida-ya kilns and pursued “Aokutani” appeared. Among the painters were the first Tokuda Yasokichi (徳田八十吉), and the first Matsumoto Sakichi (松本佐吉), who were considered to be the first master craftsmen of ao-kutani in the Meiji period.