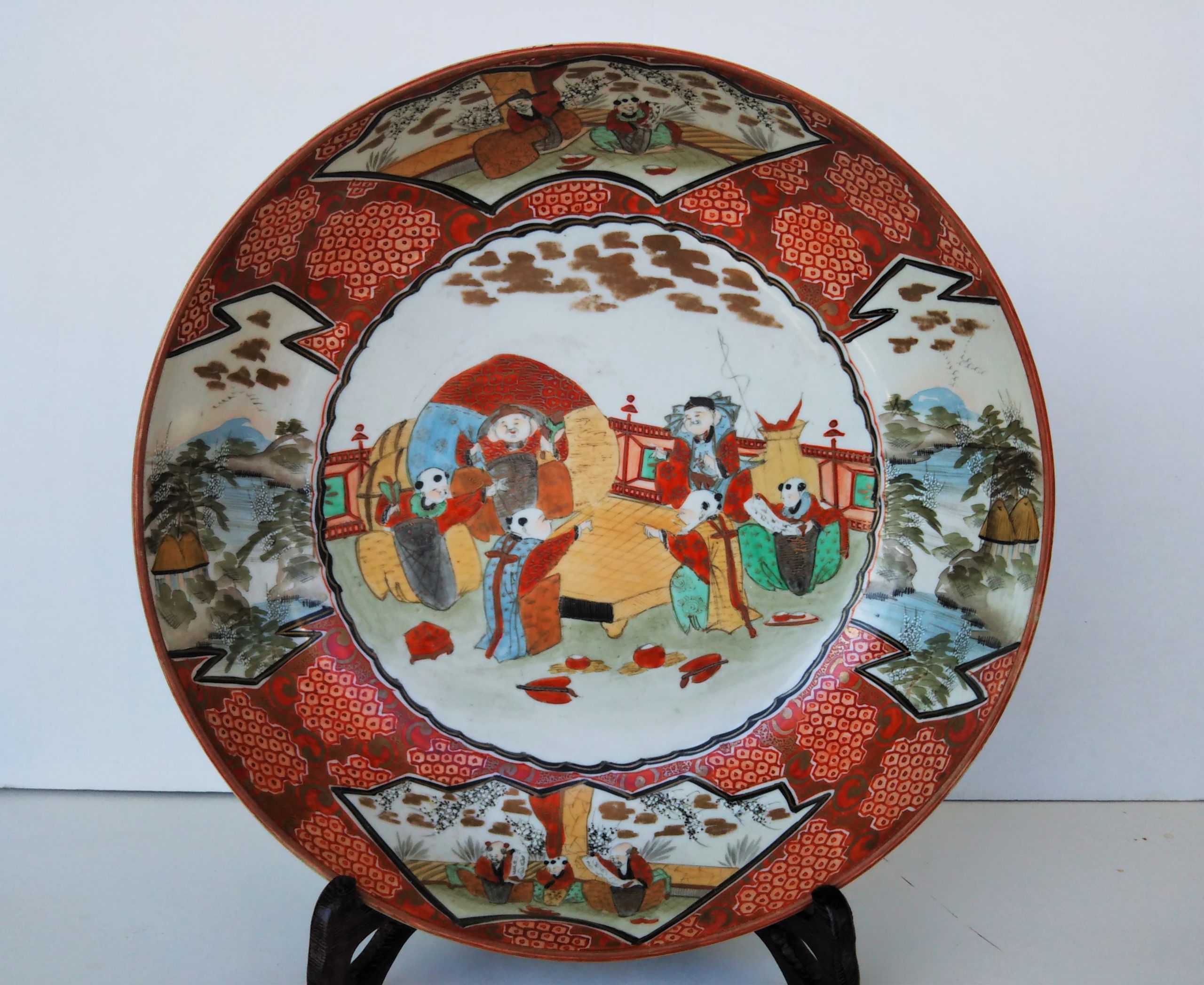 From the deep bowl, which the creator was good at, the richness of color can be felt in all the designs from the body making to the painting, that is Daikoku-sama, Ebisu-sama, and Karako’s figures in a large panel, a figure and a landscape in other windows, a gold pattern that fills the area around those panels, and a group of butterflies on the back. It’s a work that makes it fun to watch. 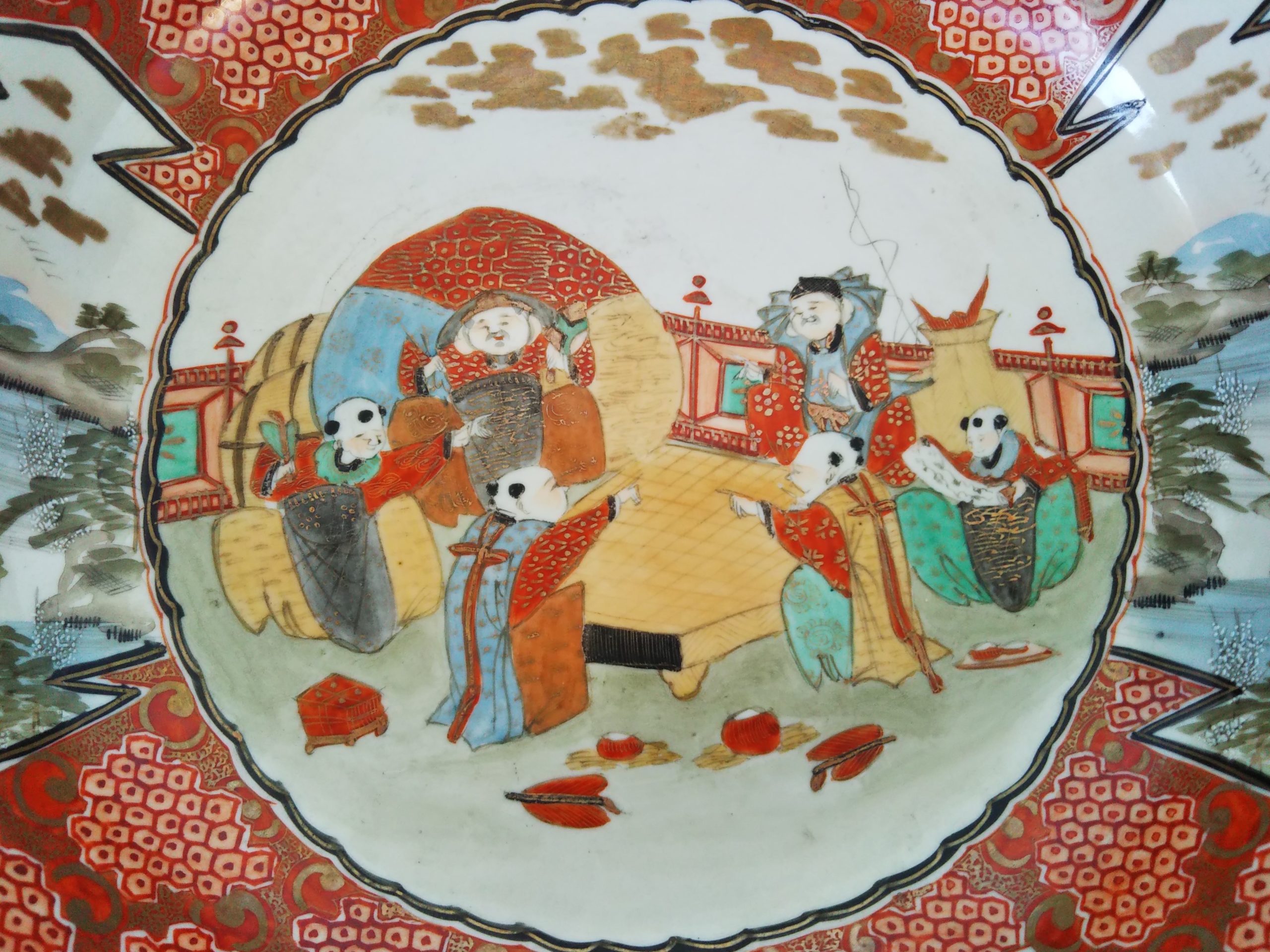 Go is one of the “four arts of koto, go, calligraphy, and painting that use hands,” and the picture of the gods of Hotei, Daikoku, and Ebisu enjoying Go has been transmitted, so in the center of the bowl is a design that “Daikoku and Ebisu” enjoying Go against a lot of karako. It is believed that the creator supposed that this bowl would be used as a lucky charm. 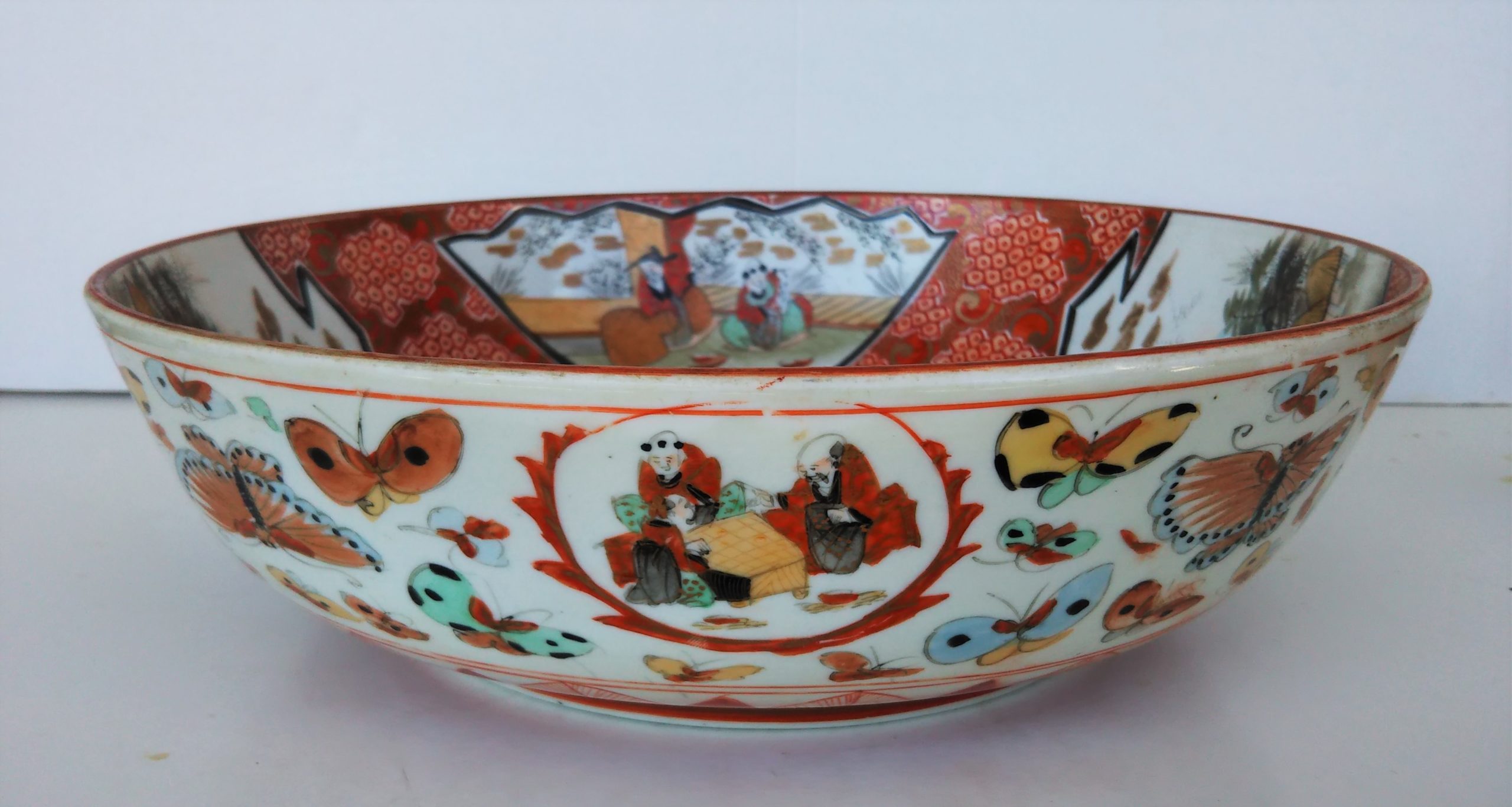 Based on the record that the creator was a potter’s wheel at the Kitade kiln in Yamashiro, when he was young, so the body is solid. The Kitade kiln was a famous base kiln at the beginning of the Meiji period, and after training there, it became a disciple of the first Hashida Yosaburo, who represented Sano aka-e. The days when aka-e and brocade had been popular were over, it looks like it was painted in different tone.

The back name is written as “大日本九谷焼西野画Dainippon / kutani / Nishino painted”. The creator was active from the latter half of the Meiji period to the Taisho period, and was elected as a representative of the domestic commerce department of the Nomi Kutani Industry Association, so it is thought that the product name was properly displayed as “九谷焼Kutani ware”.

Nishino Jintaro was a potter’s wheel at the Kitade kiln opened in 1868 in Sakae Village, Enuma County. This kiln was originally a kiln for making the body, and it became popular for its high-quality body, so, its name spread throughout the prefecture. Later, it was renamed the Sesen kiln, and added porcelain painting business. (He did not seem to be involved in the painting.)

After that, Nishino became one of the disciples of the first Hashida Yasaburo (橋田与三郎1851-1926) who followed Sano aka-e in Sano Village, and then, independently, he started the porcelain painting business and produced works for the domestic market. According to the record, in 1913, Nishino was elected a representative of the domestic department of the Nomi Kutani Ceramics Industry Association.