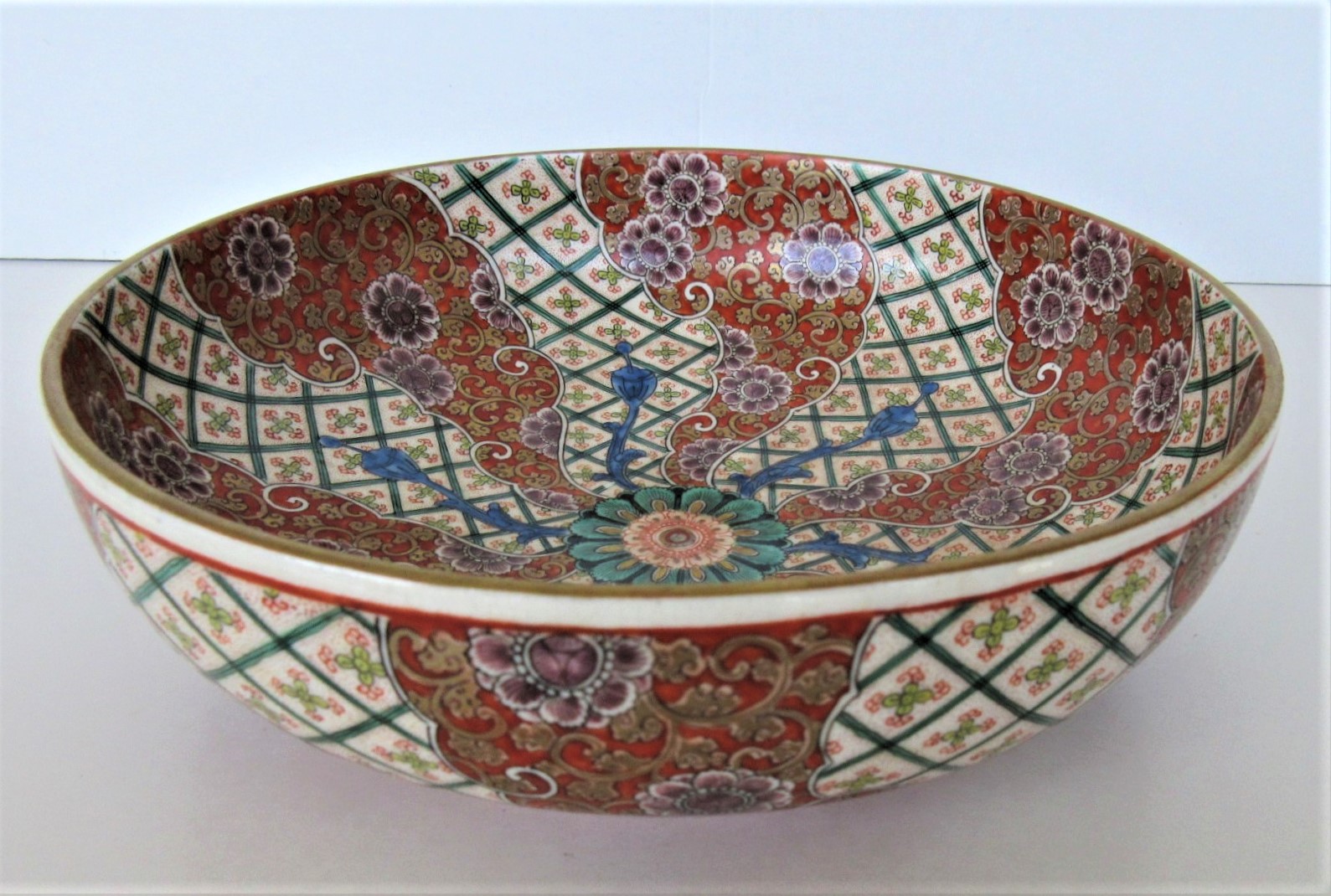 The design of this work is interesting, because it is not a bird-and-flower or a figure often drawn in Meiji Kutani. Also, the motif chosen by Utsumi is a poppy found in ko-kutani, and it was influenced by his father Nabeya Kichibei, who was a painter of the Minzan kiln in Kanazawa, so, it seems that this work was applied to the composition in the works of the Minzan kiln.

The basic patterns are arabesque and “small patters in the mesh”, and more stylized poppy with flowers and fruits are drawn, all of which are colorfully painted with five-colored paint in the traditional kutani. 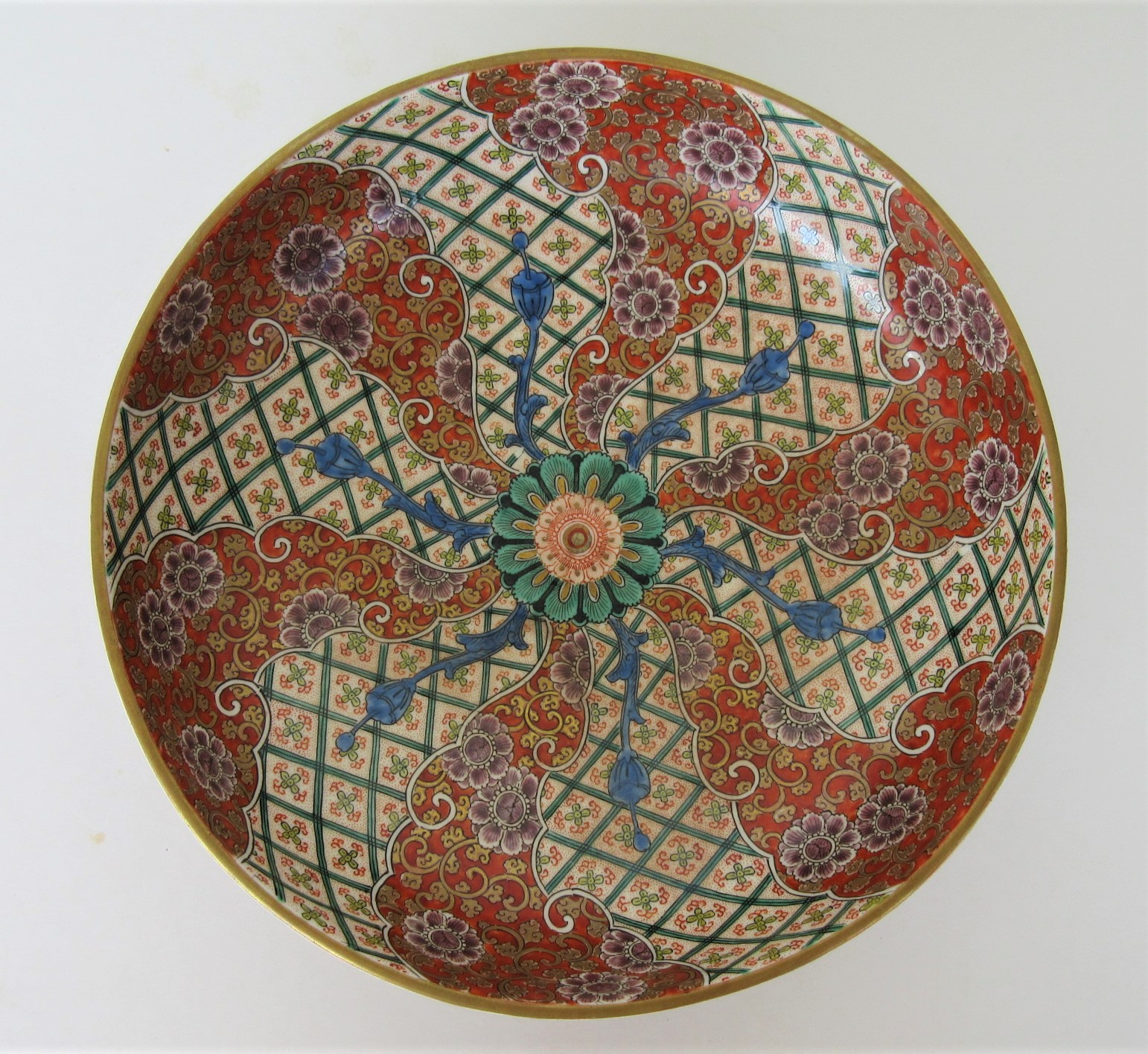 Looking at the poppy flowers from above, the petals painted in red are made into arabesque, and the stamen is drawn in the center of the bowl while making it bigger and extending to the edge. In addition, considering that the petals will be fallen later, a poppy fruit is painted in ultramarine, and a small yellow pattern is drawn in the green mesh as the background.

In this way, the paints are yellow, green, ultramarine, purple, and red which are called as kutani five colors, but unlike red or ultramarine was the complementary color in kutani of the Edo period, Utsumi used much red, and drew arabesque pattern in gold on red, because this work was one of Meiji kutani. 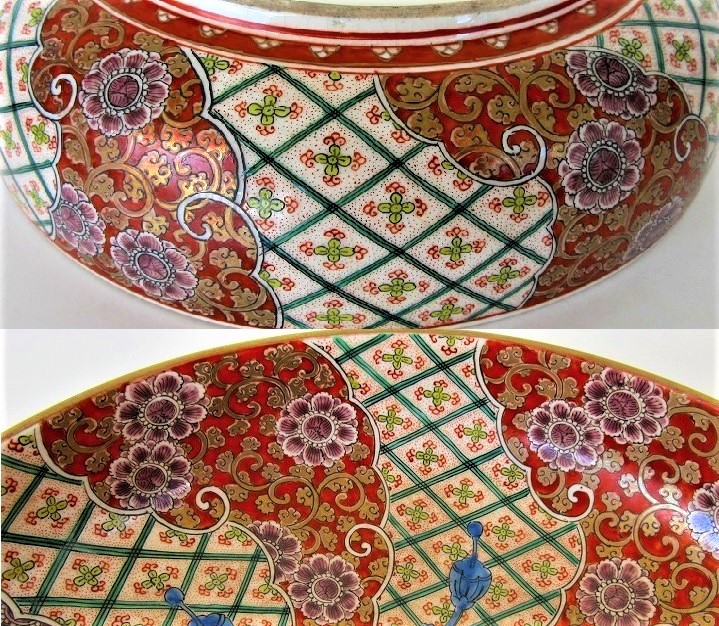 The large arabesque petals extend from the center to the side beyond the edge of the gong-style bowl, moreover to the foot oof the back. In addition, the “small pattern in the mesh” is filled as basic pattern of the front and back. The creator’s outstanding skill is felt in such a calculated way of drawing, and the precision and detail of the design, which is one of the characteristics of Meiji kutani, can be seen on this work. 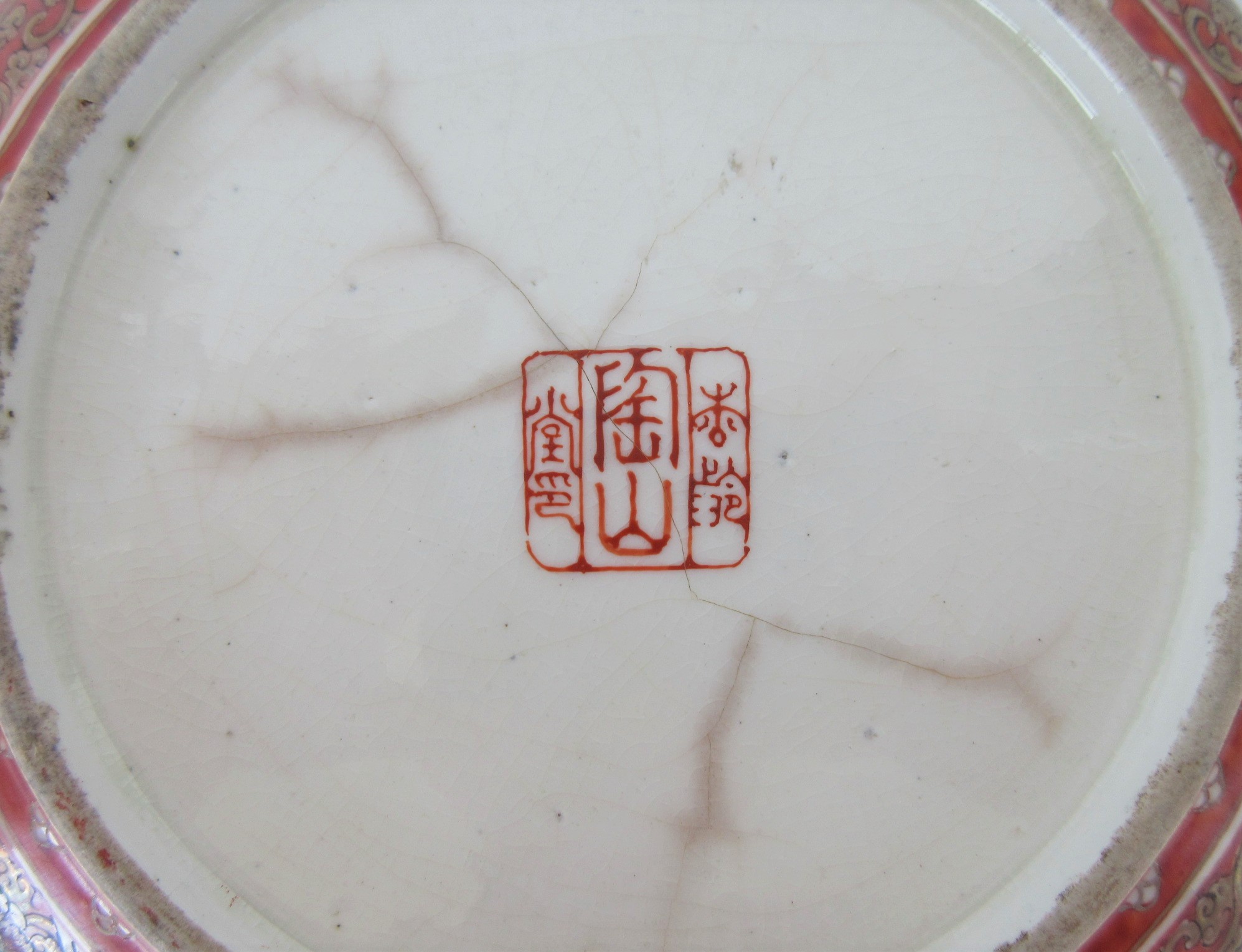 Utsumi Kichizo was the grandchild of Nabeya Jousuke, who was active in the Yoshida-ya kiln, and the son of Nabeya Kichibei, who was active in the Minzan kiln. From an early age, he learned colored or aka-e from his father, and also learned Japanese-style painting from Kano school painter, Sasaki Senryu. At that time, Utsumi received the store name of “Shorei (松齢)” from his teacher.

He started creating kutani from the end of the Edo period and was active in painting in the Ono kiln. Also, in 1867, the Kaga clan-managed kiln was opened in Kanazawa, and he was engaged with Toda Tokuji in the kiln”.

In the Meiji period, in 1869, he became the director of the painting factory of the Abe Oumi kiln, and produced masterpieces along with the later master craftsmen Iwanami Gyokuzan (岩波玉山), Haruna Shigeharu (春名繫春), and Yagi Jinsaku (八木甚作), etc. When this factory was closed in 1883, he took over the factory and established a new painting factory, which was open until it was closed in 1883. The factory received orders from pottery merchants in Kanazawa, such as Ennaka Magohei (円中孫平), Matsukan Shoten (松勘商店), Kaburagi Shoten (鏑木商舗), and Taniguci Kinyo-do (谷口金陽堂), which were wholesalers of the Abe Omi kiln (阿部碧海窯), and sold many excellent products both inside and outside the country. The later master craftsman Tomoda Yasukiyo (友田安清) was trained at this painting factory.

In Kanazawa, when Western paints began to be used from around 1879, the figures, flowers and birds, mountain and waters, etc. were painted in various colors. At this factory, the products were made in a variety of paints with the motif of “Hyakuro-te”, which was said to be created by Saita Dokai, and it became popular, so became a representative painting style in the early Meiji period. In the design, countless tall Tang dynasty figures were drawn side by side, and the patterns of the clothes were colorfully drawn in Western paints, and gold lines were added.