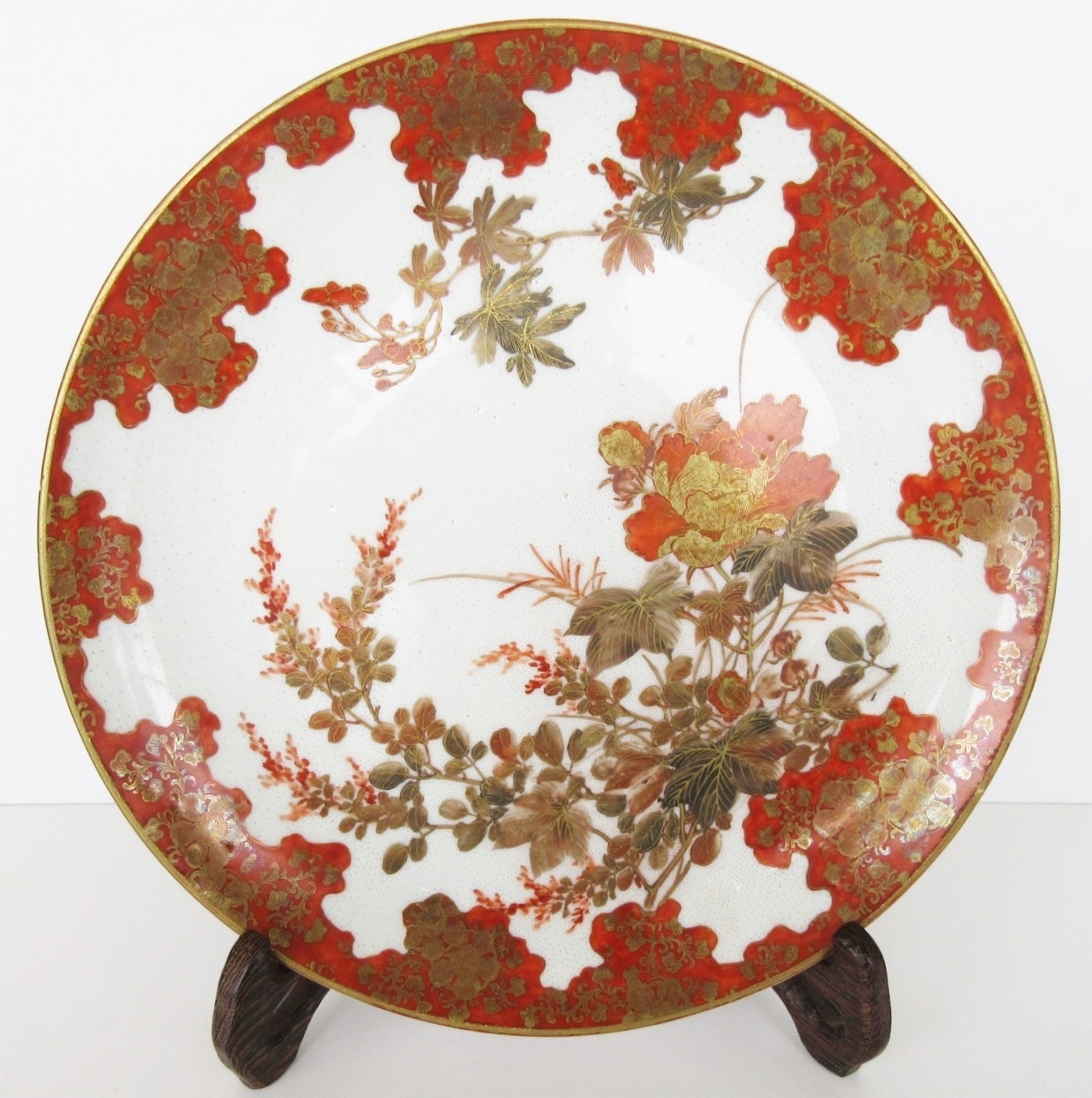 Peony and flowers drawn in the style of aka-e are further surrounded with the pattern in brocade. Furthermore, it shows the characteristics of aka-e in the early Meiji period, such as filling the background of flowers with fine red pointillism. The composition is also very similar to the work of Utsumi Kichizo (内海吉造), who was his master in Kanazawa and a master craftsman in the early Meiji period. 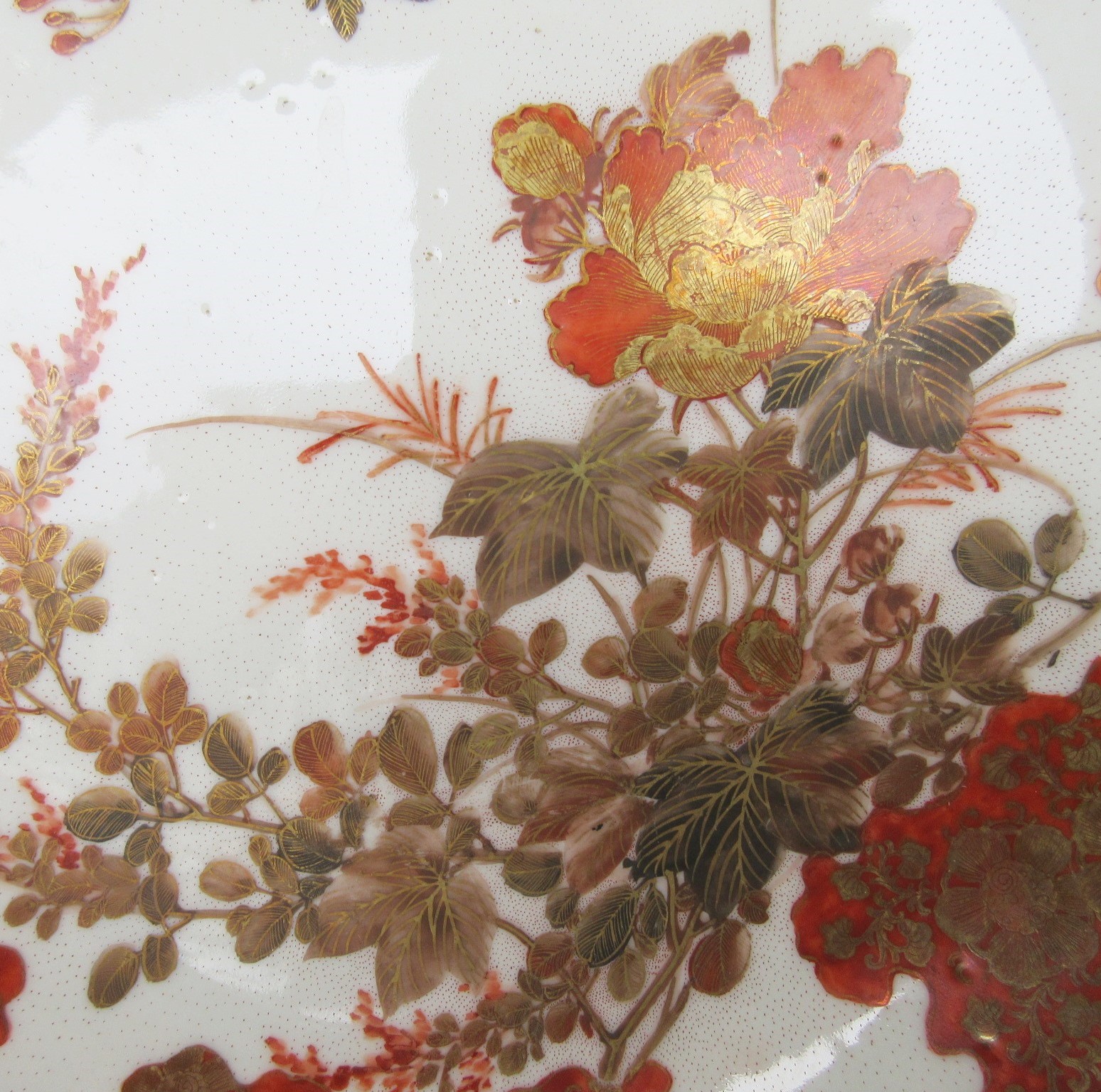 Under the branches that hang down from above, a large peony and the flowers that surround it are drawn. The eye-catching point is that the veins of the leaves on the black or dark gray base are finely drawn with gold, and even if the overall color is red, it is calm, and it is finished in a work that suppresses the gorgeousness often seen in Meiji kutani. 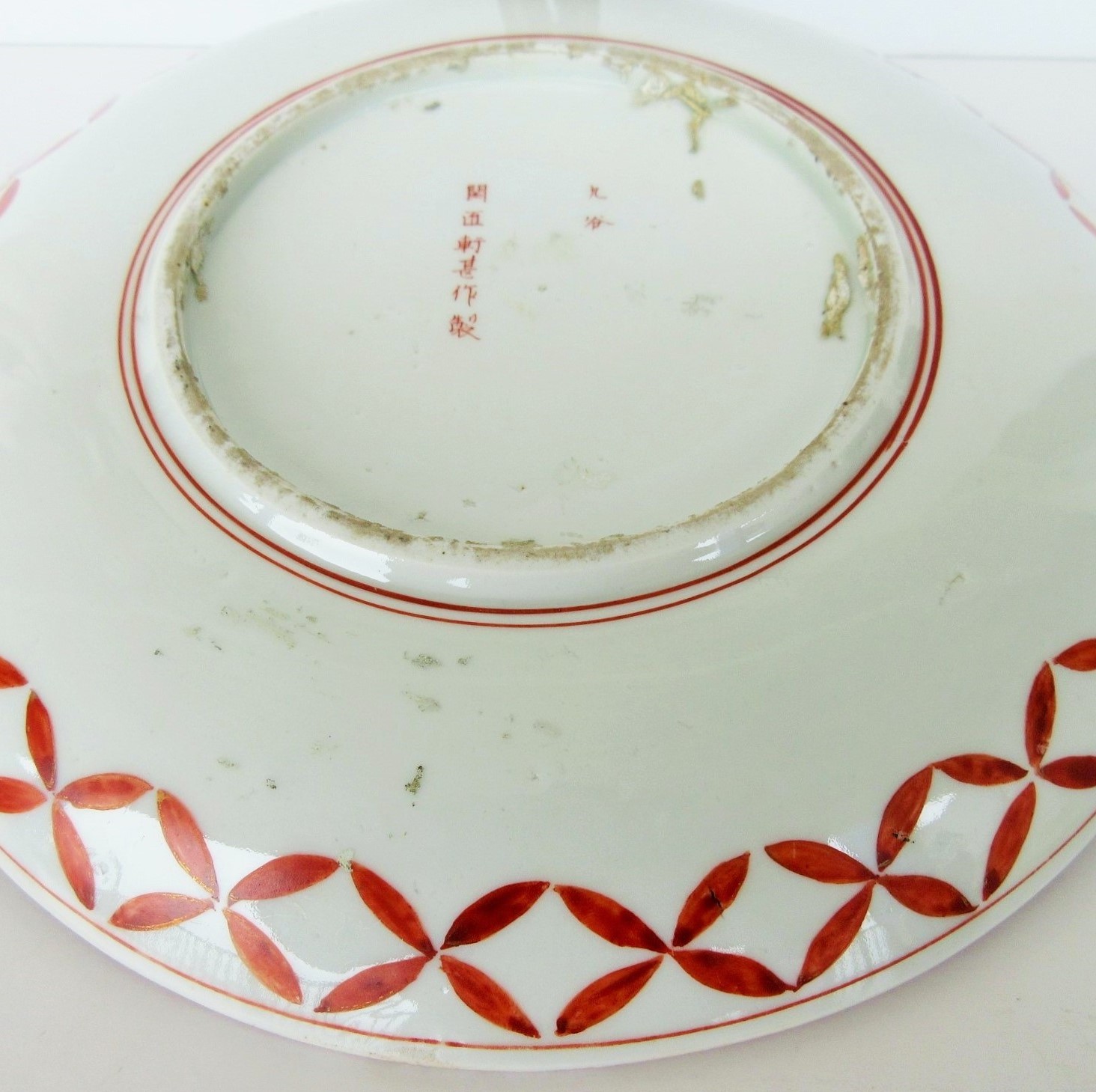 It is rare for a plate of this size to have a design or pattern drawn elaborately on the back side, and a simplified cloisonne pattern is connected to countless and circled. When combined with the meaning of the cloisonne pattern, this pattern seems to incorporate the feelings of the creator who valued the connection with people in his home village. It is also expressed in the name of painting factory “Kaishoken” (described later).

The back name is written as “九谷kutani / made by 開匠軒Kaisho-ken 甚作Jinsaku”. After Yagi jinsaku (八木甚作) trained from Utsumi Kichizo (内海吉造) in Kanazawa, he returned to Awa Village in Nomi County, and opened a painting factory with painting kiln to teach porcelain painting to his neighbors and wished to teach his technique generously. It is said that the factory was named Kaisho-ken (開匠軒).

In 1863, when Yagi Jinsaku was 15 years old, he learned porcelain painting in Awa Village, Nomi County, and then went to Kanazawa to continue improving his painting style under Utsumi Kichizo. Eventually, he became known as especially good disciple among Utsumi’s disciples. He studied also calligraphy and Japanese painting in Kanazawa.

In 1873, Yagi returned to Awa Village, where he opened a painting factory named “Kaisho-ken” to teach village people porcelain painting. For this reason, it is said that after the middle of the Meiji period, the style of painting Sano Aka-e and Kanazawa kutani became popular by Yagi’s disciples in the village.