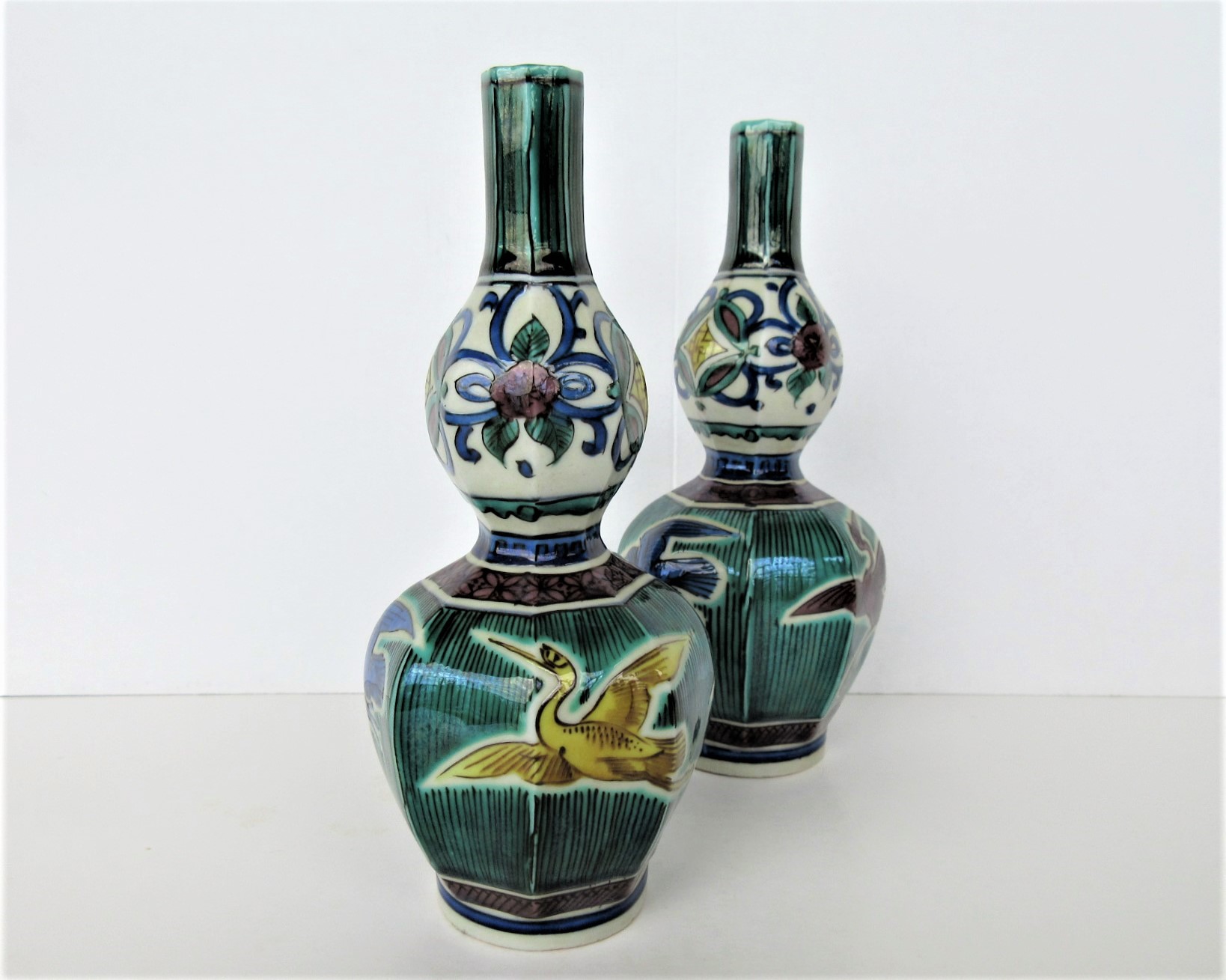 On the surface of each sake bottle, three cranes, vertical stripes by black zaffer, and flowers-connected pattern are painted with cool colors (green, yellow, purple and ultramarine) unique to ko-kutani. Looking at these paints, it seems to claim that “these are the colors of ko-kutani.”

Before this creator started creating like ko-kutani in 1908, the creation of ao-kutani (cool colored kutani like ko-kutani) had already begun. From around 1893, the first Tokuda Yasokichi (徳田八十吉) trained under Matsumoto Sahei (松本佐平), and while Tokudai was training, he began his efforts to reproduce the paints used for ko-kutani. Since his paints were almost the same as that of ko-kutani, it changed to a big trend that many creators created ko-kutani style works one after another. One of them was Matsumoto Sakichi (松本佐吉) adopted by Matsumoto Sahei. It is strongly felt that this work was created by Sakichi with a strong passion for ko-kutani. 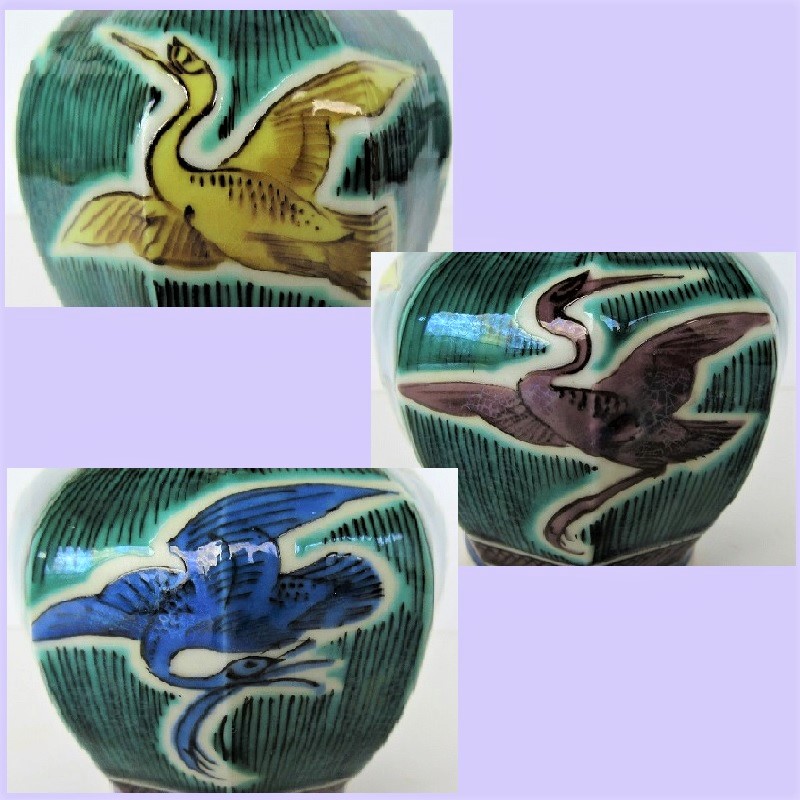 In this work, it can be seen that the design and the pattern seem to be inspired by one of masterpieces in ko-kutani. It is best expressed in the dancing of the three cranes. In the lower half of the bottle, against vertical green background, the three appearances of flying crane are painted in yellow, purple, and ultramarine, and they fly lively, and a connecting pattern of purple flowers looks like auspicious cloud on top of the cranes. This expresses a good sign.

Then, what about the ko-kutani’s masterpiece is that against green background with green vertical stripes, a few cranes are flying beautifully in a circle and they are drawn with yellow, white and zaffer lines. And violet spade patterns, which were rare at that time, are placed around. It is found that Sakichi drew with motifs such as cranes, vertical stripes on a green background, and purple spades. 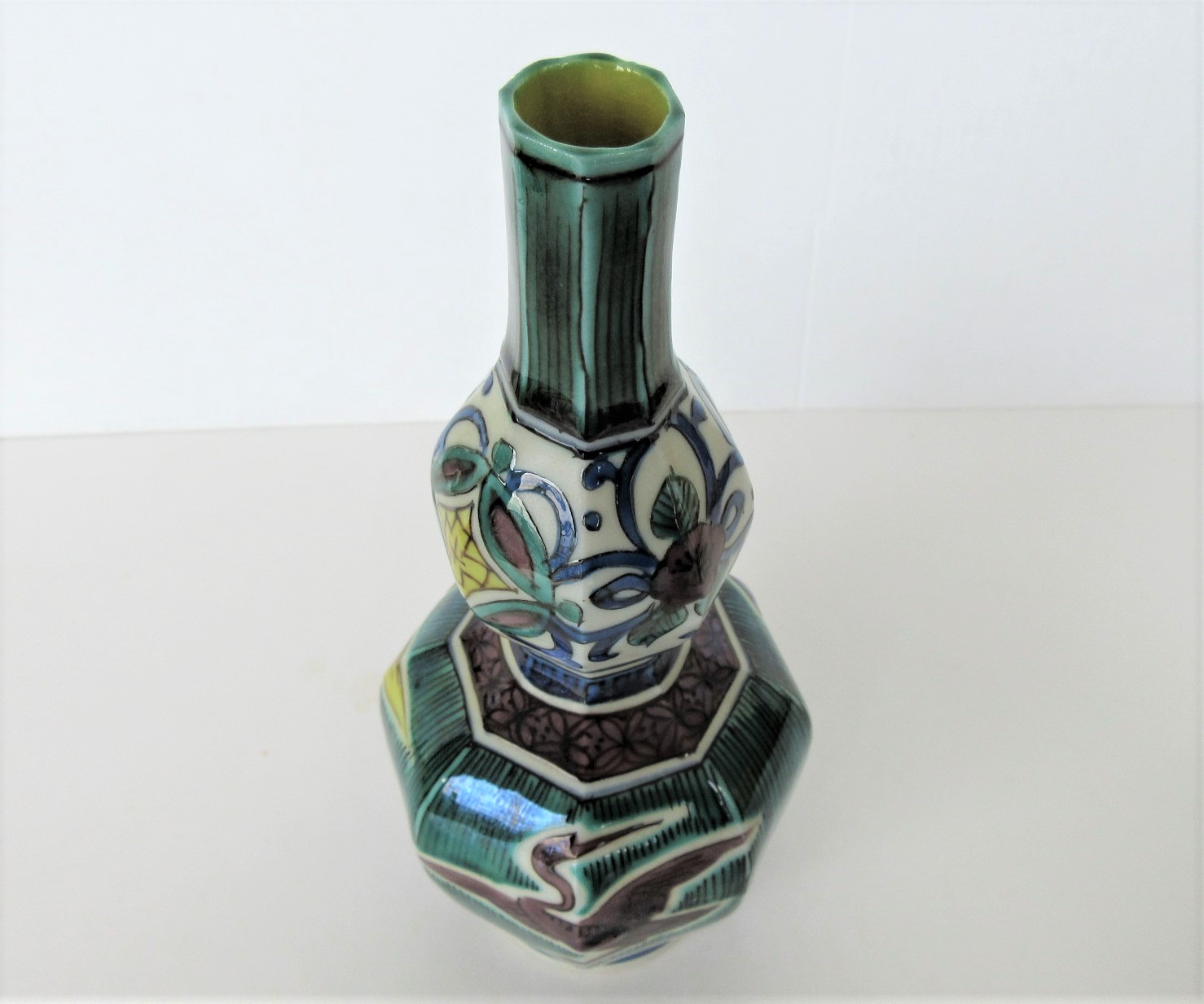 It is said that a high degree of skill was required for molding of the beautiful, octagonal shape of guard. In the latter half of the Meiji period, such elaborate body was easily supplied to many porcelain painters. It is thought that molding by embossing became popular, as many excellent craftsmen of molding for embossing played an active role. The elaborate and high skill of molding can be seen in this work together with the painting. 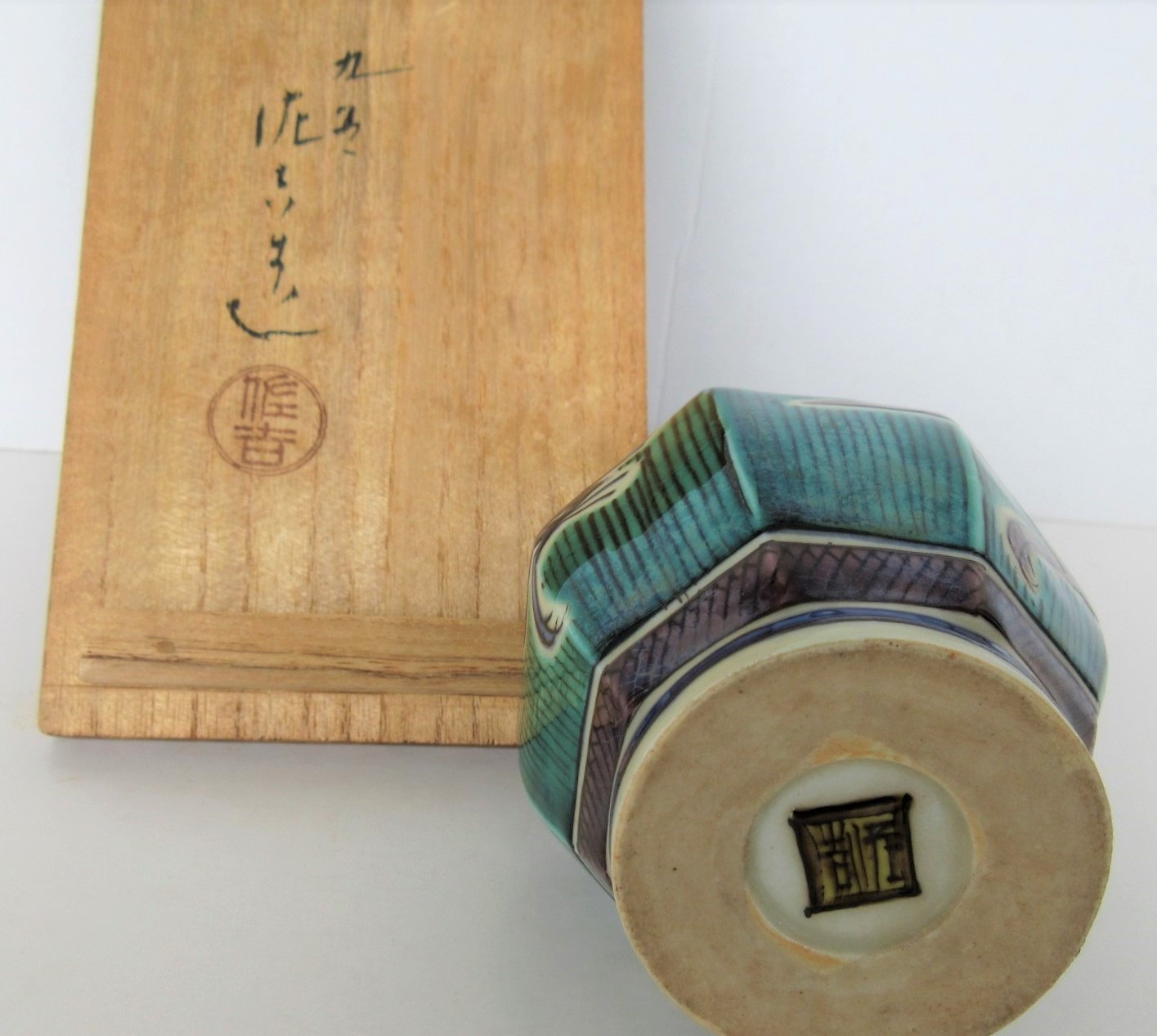 The back name is written as “佐吉Sakichi” in the double square like “福huku” of ko-kutani. This writing style was rare in Meiji kutani. For that reason, it is believed that this creator had a strong passion for ko-kutani. In addition, there are a sign “佐吉Sakichi” and a red stamp on the back of the lid of the wooden box.

Matsumoto Sakichi learned porcelain painting from Matsumoto Sahei (松本佐平), who was the founder of the painting factory “松雲堂Shoun-do”, and later Sakichi became one of his disciples. In 1903, Matsumoto Sahei moved the place of activity to Taniguchi Konyo-do in Kanazawa for some reason, so the painting factory continued to be run by his son, Matsumoto Sataro (松本佐太郎). In 1908, Matsumoto Sakichi was adopted by Sahei and took over the factory. It is said that Sakichi entrusted the factory management to Akiyama Komajiro (秋山駒次郎), who was the chief craftsman of the factory, so Sakichi was able to continue to devote himself to the research of ko-kutani. For this reason, it is said that Sakichi could continue to have a strong passion for reproducing ko-kutani. So, later he became to be called “a master of ao -kutani”.