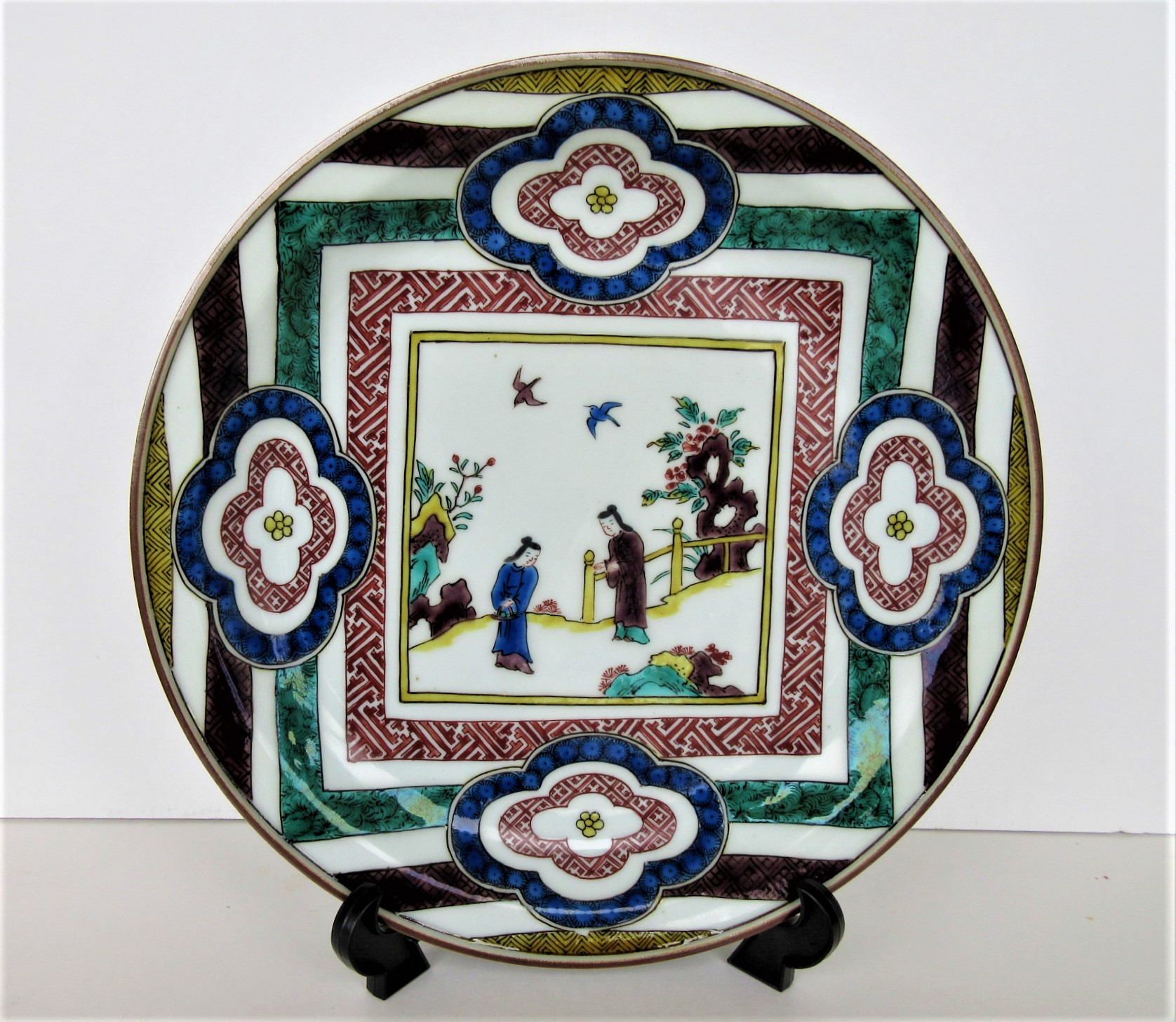 It seems to be a work that were created getting several motifs from some works of ko-kutani (a style painted using green, yellow, purple, ultramarine, and red). Based on ao-kutani painting style that the creator learned from the first Tokuda Yasokichi (徳田八十吉), the creator was able to create vivid five paints. It is believed that such techniques also are used for this work, and in addition, he got a lot of motifs from ko-kutani and finished this work as a plate that might be mistaken for a large flat bowl of ko-kutani in gosai-de style. 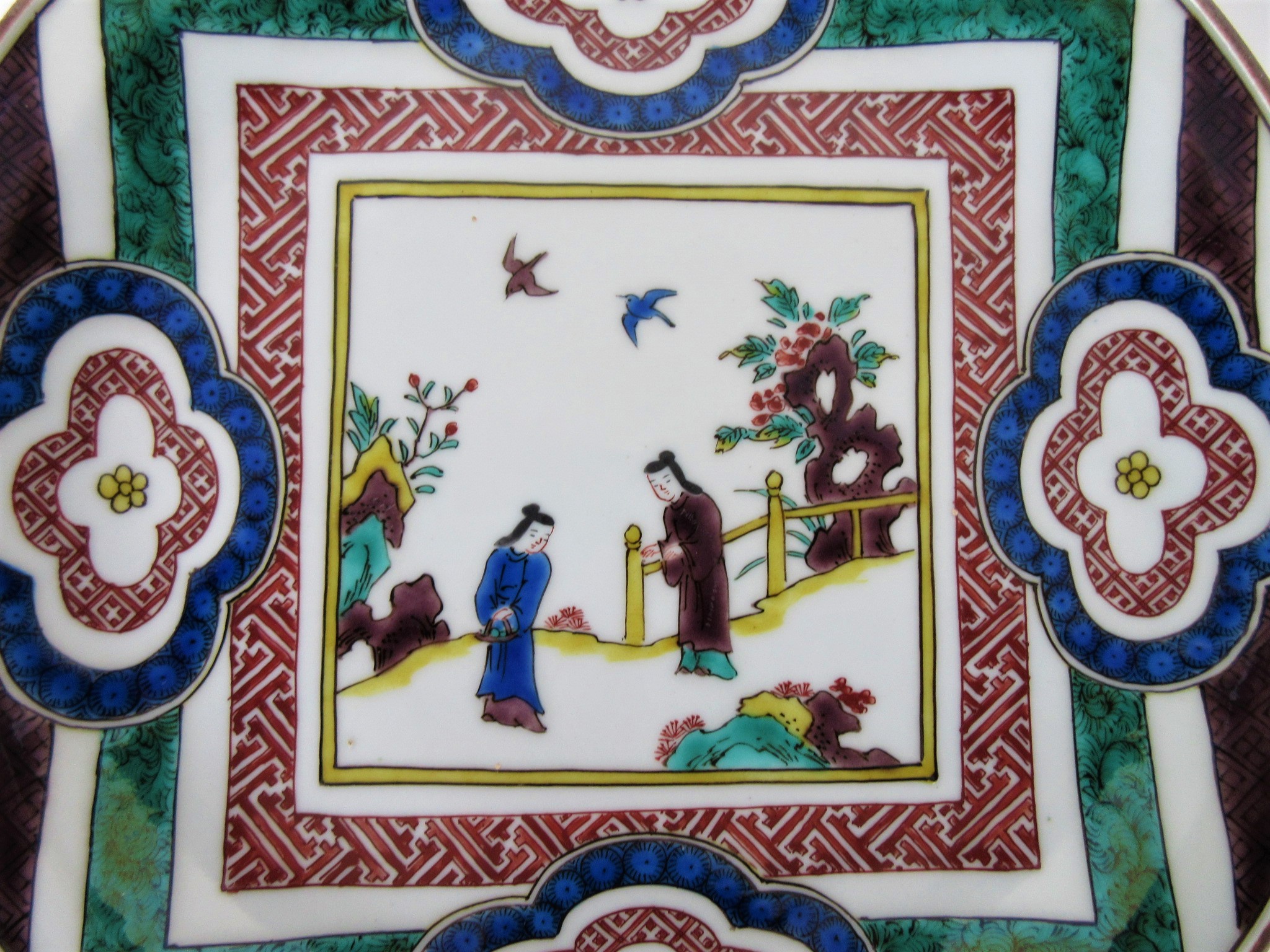 The stone pavement patterns, the quince flower patterns layered on these, and the Tang figures are like all patterns and designs that come out of ko-kutani. What characterizes this work is the scene that Tang people are standing under the two trees with flowers, talking something. This scene is reminiscent of a book of  Chinese poems and designs that became the motifs of ko-kutani. It is a work just like ko-kutani. 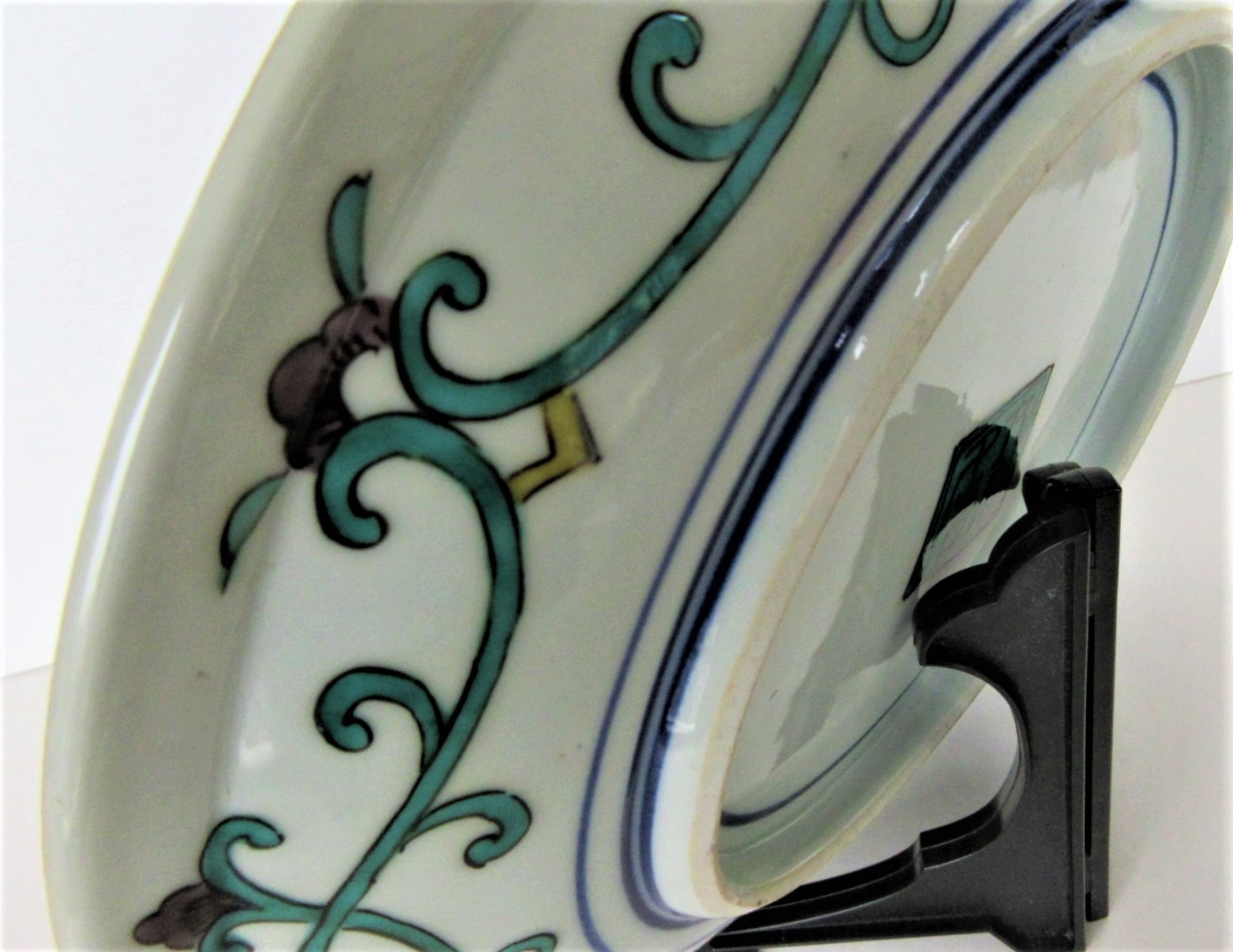 This plate spreads so that it warps toward the rim, and further warps at the rim with a width of about 2 cm. This shape is similar to the two-stage bowl in ko-kutani. 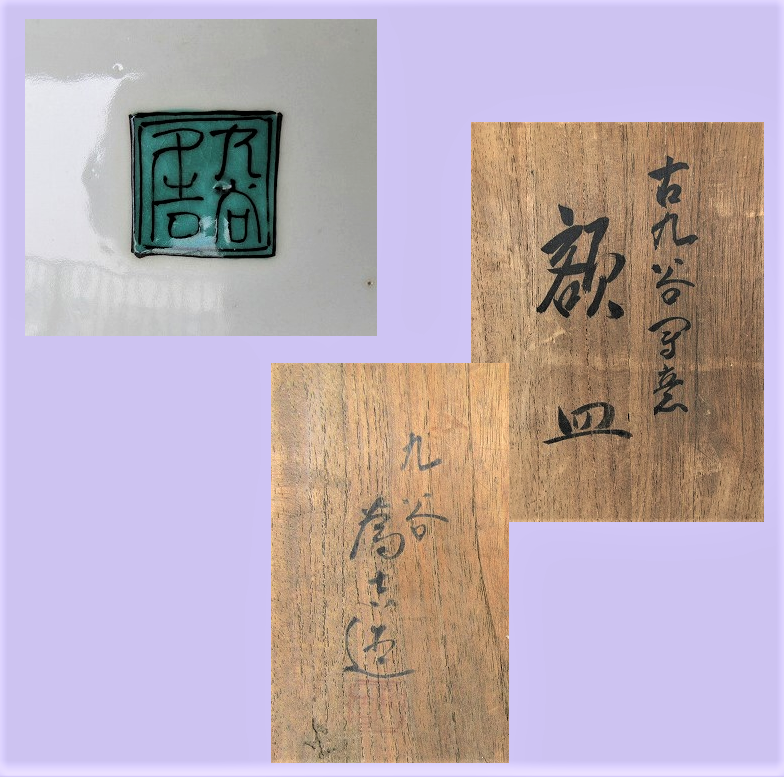 The back name is written as “九谷kutani / 為吉Tamekichi” in the double square, and “古九谷写意copied with a longing for ko-kutani / decorative plate” and “為吉Tamekichi” are written on the lid of the original box. Probably, because he would wish to entrust his longing for ko-kutani to this work. It is thought that Tamekichi imitated the form of the back name of “福fuku” in the double-square which can be often seen in ko-kutani.

This format of the back name can be seen in the first work, and the second inherited it, but the third changed to only “tame” (為) which was written in the double square.

Mitsui Tamekichi studied porcelain painting under master craftsman, the first Tokuda Yasokichi (徳田八十吉), who reconstructed the style of ao-kutani) during the Meiji period when aka-e was flourishing. After studying, Mitsui was passionate about recreating ko-kutani in colored style like ko-kutani.

In addition, he studied the traditional designs and five paints of ko-kutani, and created the works in traditional painting style, so he was highly evaluated and called a master craftsman. And, he created arts and crafts such as decorative plates, and also created many tableware used in daily life. It is said that a big pottery merchant, Kaburagi Shoten (鏑木商舗) often bought his works, as well as the works of Tokuda Yasokichi who was called the master craftsman of ao kutani, Matsumoto Sakichi (松本佐吉), Asakura Isokichi (浅蔵五十吉), etc.